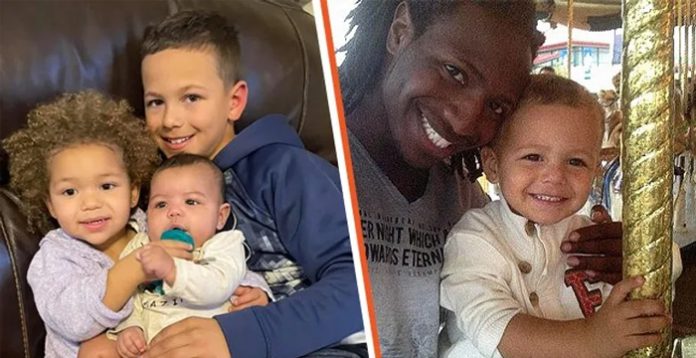 It took three years for this man to cuddle his little boy. From discontinuing his studies to paying the legal bills, court dates, and traveling frequently, let’s hope all his effort brings him the rightful end. Jeremiah Sampson has longed for his father since his childhood. He grew up without his father’s companion and met his father only when he was 13.

His father was not present in his life after that.

So, he decided to be a great family man and a wonderful father. But no one believed his determination. In 2009 while he was an Oklahoma student he used to play football for the Pittsburg State University in Kansas. During that time he dated a woman who later got pregnant. After a year, in 2010 when they are not together, he received a call from an adoption agency and learned that his ex-girlfriend was with a child.

The adoption agency also revealed that the child his most likely his son and it was probably put for adoption. After he learned that the child is his own son, he immediately wanted to have his son. He wanted to look after the baby and was determined to fulfill the duties of his father. But it was not easy, when Sampson reached his girlfriend the baby was already adopted. From there, his 3 year battle on having his son back began.

He then hired a lawyer to get custody of his son. He also had to drop out of college to pay for the upcoming road ahead. This father was determined to have his son at any cost. He saw his son for the first time in court, the kid was accompanied by his adoptive parents who were not impressed when they saw Sampson. He said, “They looked at me like I was the devil. People often complain about men who run away from the responsibilities of their children. Well! Here I’m to get my son just be become a wonderful father.”

They also put a towel around Sampson’s son’s head to prohibit Samson from catching a good look at his son. For nearly six months he had to travel to Rolla twice a week to fi-ght for his parental rights. Days passed and Sampson was not ready to give up his rights over his son. By the mid of 2011, the court granted Sampson to visit his son who was under state care in the meantime. The father and son has some difficulties bonding with each other in the beginning as the kid didn’t recognize his biological father. But, just after a few meetings, they both developed a strong bond.

Finally, just after Christmas in the year 2013, Sampson was given custodianship by the court. The boy was named Hilkyah and the blissful dad expressed his feelings on seeing his little boy “he reminds me of myself, he has a lot of energy.” This is the energy that Sampson has shown in the last three years while fi-ghting his son. Seeing the father and son energy together, Carol Carter Sampson’s second-grade teacher who is still close to him said, “it was more like David-and-Goliath situation to engage on the adoption agency, but he never gave up.” Sampson is not alone in the line, in 2013 Preston king from southern California also held a bold mission to become the legal father of his child.

Preston claims that his ex-girlfriend gave up their child for adoption without his knowledge. He states that so far he has done his best as a father, he has been taking a second job and did everything for his ex-lover when she was pregnant. In the meantime, his ex-girlfriend states that he was never there for her throughout her pregnancy.

But Preston still continues to fi-ght for his parental rights. Adoption and Biological father’s rights are messy areas of the law that involves deep debates. What do you think, does a mother has the right to give the child for adoption without the father’s consent?