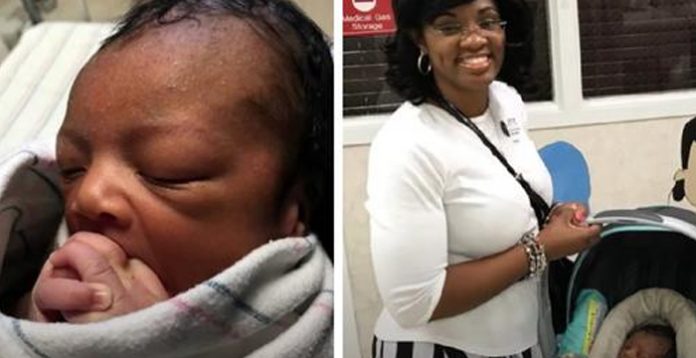 Usually, most couples feel on top of the world when they realize they are going to bring a new life into the world. They do everything possible to make their baby’s arrival grand and spend a lot of time on it. On the other hand, many don’t find the need to put so much effort into their baby’s birth because they didn’t even want a baby in the first place.

They pretend like it’s an unexpected gift given to them from above that they don’t know what to do with.

That’s how many kids end up being neglected and left to fend for themselves. Lorraine and her husband had been dreaming of having a child together, but because she was a br-east c-ncer survivor, they knew that it wouldn’t be possible for them to have kids of their own. But they didn’t stop hoping for a miracle to happen and it did!! A college student in Tallahassee, Florida, heard a noise come from the parking lot of her apartment. She was quick to recognize that it was the voice of a baby crying.

When she went a little close, she found the baby in the back of a truck where she was hungry, cold, and just wearing a soiled diaper. She immediately called the officer, who later took the baby to the Tallahassee Memorial Hospital. The respiratory therapist, Lorraine, assessed his breathing and made sure he

was fine. When she took the baby, who is now named Charlie, in her arms, she felt a special bond. She wanted to adopt him. Within a few days, Charlie found his forever home. Lorraine said that Charlie is a miracle and that all her prayers have been answered.

Lorraine said that the first week was tough for them since she and her husband Charles were still taking time to figure things out, but they wouldn’t want to trade it for anything.

Charlie has now been legally adopted into the Charles family. Lorraine said, “Adoption is a wonderful, wonderful thing. There are so many kids out there that need someone to take care of them and become their forever family. You don’t have to be perfect to be an adoptive parent.” and rest we can be assured that they would give Charlie a life filled with love and care.