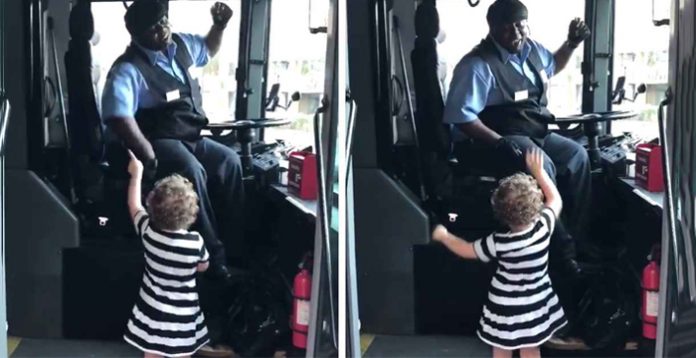 Brette-Ashley, a photographer, uploaded a touching video of her daughter performing to a Taylor Swift song she heard on the bus two years ago. When Emerson heard Taylor Swift’s “Shake It Off” playing on the bus in Orlando, she sang along and told the driver how much she enjoyed the song. Brette-Ashley captioned the post, “Best moment from our vacation so far.”

“Before getting off the bus, Emerson sh-outed to our bus driver, ‘This is my favorite song!!!'” The driver pulled up the sound and engaged in the dancing, all while staying seated, with a broad smile on his face. Emerson presented a spontaneous performance, dressed in a lovely black and white garment that spun as she danced. The photographer from Rochester, New York, was st-uck by the driver’s generosity and excitement for her daughter.

After two years, the video has seemingly gone viral, with over 2.6 million views. “My phone is bu-rsting… Evidently, Emerson’s video has gone viral all of a sudden!!!” Brette-Ashley posted on social media on February 21. She said, “How strange would it be if @theellenshow @taylorswift could find this beautiful guy down for spreading so much joy?” Viewers have also taken on the role of investigators, attempting to solve the case by assisting in the identification of the driver. Brette-Ashley provided them with some useful information, such as the fact that the family had been in Orlando, Florida, and was on their way back from Sea World when they met the driver.

Tara Duprez, a social media user, supplied Brette-Ashley with a name and a link that has since been removed. Duprez added on the photographer’s post, “His name is Fred.” Brette-Ashley informed her that she had sent Fred a note, which indicated that the mystery might finally get solved. Nonetheless, a small girl’s pure excitement at hearing her favorite song played and an adult’s eagerness to join along has touched the hearts of hundreds of people across the country.