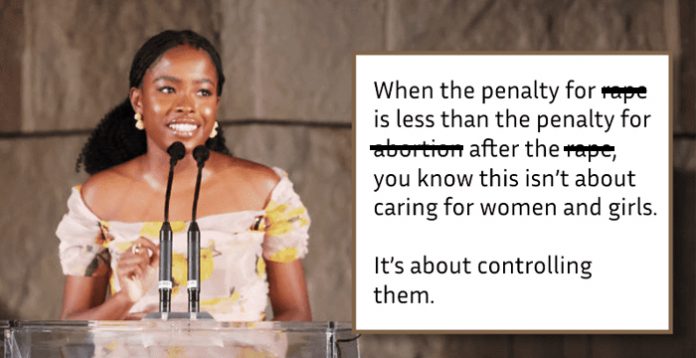 Poet Amanda Gorman gave 8 reasons why every American should stand up against the court wanting to overrule Roe v. Wade Judgment. The USA has been facing issues surrounding the question of giving a woman the right to choose whether to give birth or not. Amanda Gorman, a poet, and activist who earned fame for her poem ‘ The hill we climb’ she recited at President Joe Biden’s inauguration has now come to the limelight again when an old poem of hers regarding the same issue resurfaced.

A recent Supreme Court draft that got leaked revealed that justices wanted to overturn the infamous Roe. v. Wade’s judgment spoke about a women’s right to give birth. The 23-year-old Gorman gave eight reasons why Americans should support feticide in her poem. She also gave her opinion on the same to NowThis News.

1. Gorman says anyone who doesn’t want a woman to choose whether she wants to be a mother or not, doesn’t respect women. Here she highlights how feticide is more seriously taken than other mishappenings committed against women.

2. A prohibition on a woman’s right to give birth gives birth to unplanned motherhood which promotes patriarchy. Further unplanned pregnancy gives birth to economic inequality since the parents would not always be in a position to bear the expense of a child.

3. Pregnancy is a personal choice and isn’t a public issue that requires politicians to give their opinions.

4. If Roe. V. Wade’s judgment overturned a woman’s freedom to choose if she wants to be a mother will be curbed. She won’t have access to safe services when it’s needed the most.

5. Such immoral restrictions will cause an undue burden on women.

6. Gorman says such laws are targetting women and are causing more complications. If there has to be equality, then women must be given the freedom to choose their life.

7. This is not just a matter of women’s rights, but it’s also about civil rights though it doesn’t look like that upfront.

‘Pregnancy is a private and personal decision and should not require the permission of any politician.’

In 2019, poet Amanda Gorman took a stand against abortion bans in the U.S. and her words are just as relevant today. pic.twitter.com/8hIAh8tmqh

8. Gorman says this is the moment when we have to act upon and support women if we want to ensure equality in real life.