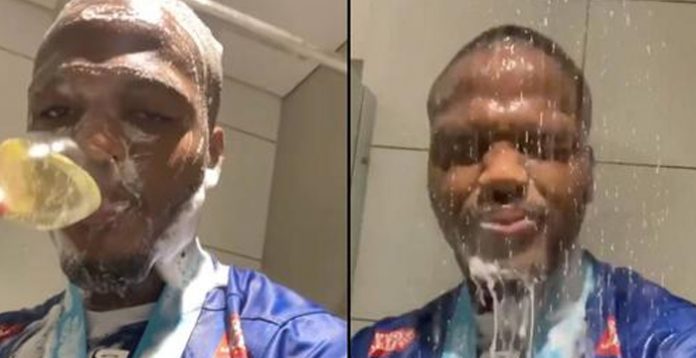 When athletes win some major accolade in their chosen sport, there is often much rejoicing. But all that partying has been put to shame by one South African rugby player. Hacjivah Dayimani’s Stormers team won the United Rugby Championship on Saturday (18 June), beating the Bulls 18-13 in the final. He and his teammates will have been enjoying themselves all through the night, high on the glory of their trophy win and cherishing the moment.

However, most people’s celebrations tend to wind down at some point, sometimes going to sleep with the trophy they won tucked up in bed beside them, but we are not dealing with most people here. Three days after the big win and Hacjivah is still dressed in his kit and going strong on the celebrations. So much so, that he filmed himself on the third day of celebrations drin-king bubbly while fully clothed in the shower, boasting that he hadn’t had any water since the half-time break during the final on Saturday.

Clearly not wanting the party to end and living his absolute best life, Dayimani has suggested he’s going to be staying out for a whole week as he mentioned his ‘seven day journey’. He’s been keeping people posted about his on social media, promising not to stop until he met the mayor of Cape Town or the South African president. Incredibly, he was joined on the fourth day of his celebrations by Cape Town’s mayor, Geordin Hill-Lewis.

Dayimani joked that since he had the mayor joining him for a drink he’d have a word about getting rid of people’s traffic fines while he was at it. He’s been making his way through a number of pubs and bars in Cape Town, though one of his first drinks was out of the trophy itself. And as for the kit he’s been wearing ever since his victory – as well as in the shower – it will get a bit of a rest today as the rugby player had an exam to do.

However, the 24-year-old’s plan is to pop his kit right back on once he’s done and set out once more. The United Rugby Championship is a competition featuring rugby union teams from South Africa, Scotland, Wales, Ireland and Italy. This is the first time teams from South Africa have made it to the final of the competition, and the first time the final featured teams not from Wales, Ireland or Scotland, which might explain the extended partying. Hacjivah Dayimani, wherever you are, congratulations on your win and know that you are an absolute legend for still partying in your kit days later.

Louis Ferreira – Lol I am a Stormers supporter. This was the first time in our history that we won an international tournament. Give us a break

Alfie Mcelwee – Jack grealish does it and there’s an issue, double standards?

Chris Neve – Amateur! Go check how ovi did it when he won the Stanley cup!

Danny Speed Gornall – To be fair, who wouldn’t be? 3 days is solid effort but comeon, it’s not praiseworthy.

Phil Nolan – If he was a footballer he’d be dragged through the streets like gaddafi. But he’s a rugby player so he’s loike, absolute ledge