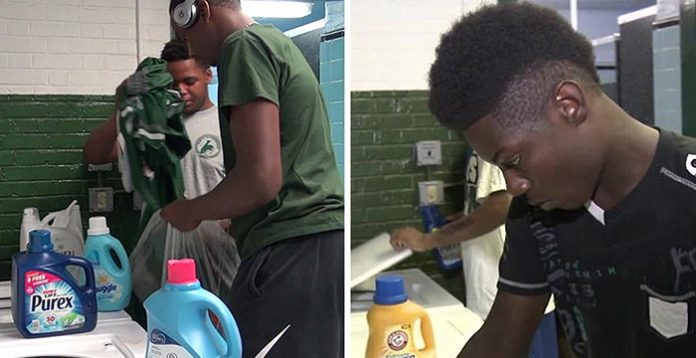 A school in the USA went ahead and installed a washing machine for children who are mocked and b-llied for their dirty clothes. Some students from the West Side High School in Newark will be able to make use of school laundry at no cost. That would help them to clean their clothes in their school itself.

The school authority came up with this idea after a girl had an argument with the school security staff who wanted to check her bag. The staff was unaware that the girl had been made homeless and she refuses to give her bag to the staff as she had dirty clothes in it. Not only that but several other students were also b-llied for their dirty clothes that they even stayed away from school sometimes.

Akbar Cook, the principal of the school said that the issue is not isolated to a group of students, hence I have decided to place the washing machines in the school to provide the children their best shot at gaining a better education.

“These are good kids who wish to learn, they are missing three to five days in a month because they are b-llied for their dirty clothes,” the principal told CNN News. I have even changed the color of the uniform to a darker one so that they could wear them for more days without washing. However, students are still facing difficulties to maintain it clean to attend school.

So, this autumn when the school reopens for the next academic year there will be a new laundry room for the students.

They can use it for three hours a day without any cost. The laundry room would have five washing machines, five dryers, and a bundle of washing powder that was received as a donation from people around.

The headteacher believes that this step would not only help students in keeping themselves clean and attending school regularly. In addition, it would also help them take pride in their appearance and bring a positive effect on their self-esteem. Principal Cook continued: “We are trying to teach them to navigate their pride.

He also states: “we are trying to teach them to their steer their pride.” “My children are fighters, they just require good ways to fight for themselves and take pride in what they are capable of doing.” We wish the scheme to be a great success and the kids receive the education that they are entitled to.