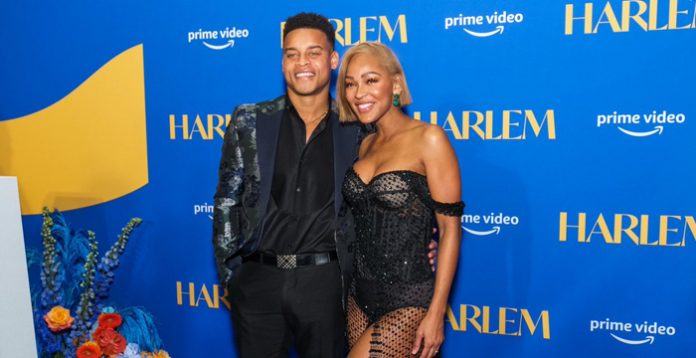 The new Amazon series, ‘Harlem,’ is a must-watch for every millennial woman who supports each other. The series revolves around the lives of four girlfriends navigating life and love in New York. The series stars Meagan good (Camille), Jerrie Johnson (Tye), Shoniqua Shandai (Angie), and Grace Byers (Quinn). The series also stars Robert Ri’chard, who plays Shawn, a young father looking for love while working at a local club.

In a conversation with ABS, Ri’chard was seen talking about his old friend Meagan. He said, “Obviously everyone knows me and Meagan have tons of history together. We’re sort of the iconic Bobby and Nina. She’s all grown up, and so am I.” Ri’chard and Meagan had starred in the 90s puppet sitcom ‘Cousin Skeeter.’ In episode 4 of Harlem, Meagan’s character mistakes Ri’chard’s character, Shawn, for an old high school boyfriend called Bobby. Shawn goes on to give Quinn a lap dance in one scene when Camille watches in shock. Shawn and Quin spend a night together, and although it was meant to be a one-night stand, Quinn ends up sticking around much longer than she thought she would.

Ri’chard received a lot of appreciation for his role as a dancer. Towards the end of the series, Quinn discovers that Isabela is gay. When asked about playing the role of a s-ripper, Ri’chard says that as long as he gets paid, he’s always willing to take his shirt off.

He added, ‘I’m an Emmy Award-Winning actor. I’ve played tons of characters, and I don’t take my foot off the grass.” While Quinn is excited by Shawn, she starts having second thoughts about her dating life after meeting Isabela.

Meanwhile, Quinn’s mother goes on to enlist her to style Isabela and reshape her image in the media but, there are chances that Quinn and Isabela might take their budding friendship to another level. Meanwhile, Sullivan James, who plays Camille’s boyfriend in the series, is intertwined in his triangle with Camille’s ex Ian. Ri’chard also went on to say, that he thinks the conflict between the characters might be continued, even in the next season.