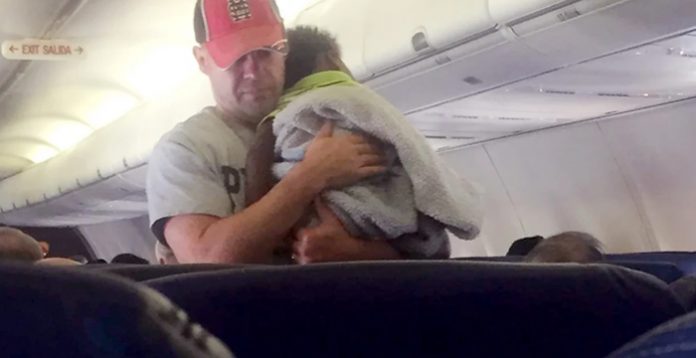 Many passengers on a recent trip were stunned when one man volunteered to take a stranger’s kid so she could relax. Andrea Byrd, a passenger, told TODAY, “It was very wonderful.” She took a photo of the father carrying the infant up and down the aisle and shared it on social media, where it quickly became a global sensation.

Byrd said in the post, which has been viewed almost 100,000 times, “I was in tears.” “Not because he was white and she was black… but because it reminded me today that there are still people out there who care.”

On Sept. 5, a Southwest Airlines aircraft was scheduled to fly from Minneapolis to Atlanta. Monica Nelson, who is expecting her first child, told TODAY that she was concerned about flying alone with her 20-month-old son Luke. When he became restless and refused to sleep, the man who sat next to them startled her by offering to assist, she explained. He proceeded down the aisle with the kid in his arms, comforting him to sleep.

Nelson, an Atlanta teacher, said, “It was such a relief since I was a bit apprehensive flying with him without my husband there to assist out.” “I’m still grateful – he was really thoughtful.” She said that the man’s name is Reid and that he had a kid called Luke. Byrd claimed she was saddened by the sight since she had two children of her own and could imagine herself in the mother’s position, which prompted her to take a photo and publish it online.

“He simply swooped in,” she explained. “Things like that don’t happen very often. It was quite sweet.” Their tale has already reached thousands of people all across the world, demonstrating the power of a single act of compassion. Nelson stated, “It’s wonderful to know the world isn’t all evil.” “There are a lot of wonderful individuals out there.”