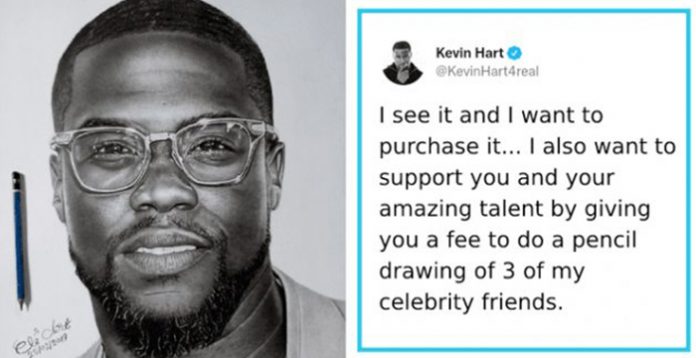 An artist from Nigeria, Eli Waduba Yusuf was responded by his hero, Kevin Hart when he posted his work online that has Kevin Hart sketch. He responded to the artist’s post and let him know that he is willing to buy thy artwork. In addition, he also offered him more work. Yusuf a hyper realist artist said that it was like a dream when his favorite comedian responded to his work.

I see it and I want to purchase it…I also want to support you and your amazing talent by giving you a fee to do a pencil drawing of 3 of my celebrity friends that I can gift it to. DM your info and let’s get to work! https://t.co/ImOYa0UNlL

He posted his work online and wrote, “My name is Eli Waduba. I am a hyperrealism pencil artist and I am based out of Kaduna in Nigeria, please retweet, let my work be seen by @KevinHart4real thank you. And with that some people retweet to increase the visibility of the post and eventually it came across the eyes of Kevin Hart the artwork was good as any black and white photo, reported ABC News.

Kevin loved the portrait of him and he replied, “Woooooow! Talent out of this world…” and then added the following tweet, “I see it and I want to buy it…I also want to support your amazing talent by offering you a fee to do a pencil art for three of my celebrity friends that I can gift it to. DM your details and let’s get to work.”

His tweet spread over the internet and received over 426K likes. Hyper-realism is a form of art that is characterized by the depiction of real-life in a sketching manner using charcoal and graphite. Yusuf told ABC News “he is my favorite comedian and I have watched lot of his movies. I wanted to give a gift as a way of saying Thank you.”

Yusuf said it was so unreal when his favorite star contacted him. “It has been overwhelming.

I still can’t believe it, it was like a dream. Kevin Hart has blown my mind,” he told BBC.

Yusuf said several things changed in just a short time. “Just days before I was just a local artist who longed for the world to see my drawing but I never knew this would happen all of sudden,” he said. He ascribe his mom for supporting, him in pursuing his dream even though she never had a formal education.

Yusuf was inspired by a Nigerian artist, photographer, activist, and Engineer Azine Stanley, who is best known for creating hyper-realistic pencil arts.

He said, “Azine Stanley’s work showed me the probabilities of art, so, I made up my mind to reproduce what I see and even do better. I strive for improvement every day and made sure each of my new work is always better than my previous one.”

Stanley was happy and proud to see Yusuf’s work, he said, ‘I feel blessed when I could inspire someone out there. To watch people win is the best deal in life, you couldn’t get e better feeling than that.” He also said he is ready to help Yusuf in the future.

The Twitter user has already started guessing who the three celebrities would be, that Kevin Hart will commission artwork for from Yusuf. Most people have already penned down one name which they feel is given, “The Rock is about to have a great portrait of himself,” wrote one user.

Happy birthday to my favorite comedian @KevinHart4real, thank you for your support and I pray you enjoy good health, peace and inflow of new ideas to your creativity. pic.twitter.com/50vlUXedGk

Yusuf on the other hand said, “ I am waiting for him to tell me who I had to draw and I will leave it up to him to decide,” said Yusuf.