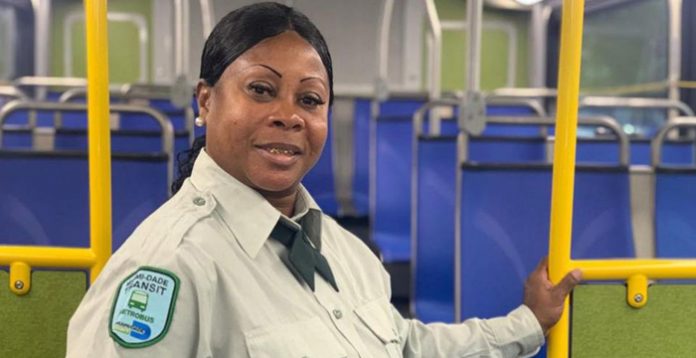 Laronda Marshall, Miami-Dade Transit driver, has rescued three lives during her bus driving career. Marshall also has a cape with an “S”on front who has saved three lives since her beginning of bus driving career. Previously, Marshall’s immediate response saved the life of a passenger, a man who collapsed in his seat and seemed to be ill, the Department of Transportation and Public Works said.

She was driving the 77 bus near Northwest 103rd Street and Seventh Avenue when a passenger informed about the ill man.

Experienced bus driver immediately pulled over and dialed headquarters for help, then she moved to try to wake him. However, he wasn’t responding. Then Marshall, with the support of other passengers, laid him on the floor and started CPR. She continued pressing his ch-est until po-lice and paramedics arrived. Marshall said, “I have a love for people, and my instinct is to jump in and help.” Paramedics said, ultimately, the man survived because of Marshall’s quick action otherwise he would have leave this world.

“The paramedics told me he would have leave this world by the end of the line,” Marshall said. Although being called a hero or saviour is not new for her. Because this was the third time she has come to the rescue people. In 2017, Marshall found a pedestrian lying in the street after being h-it by a car. She parked her bus in a manner to protect the man from further wounds, she even stayed with him until help arrived. And on time, Marshall spotted a girl alone by herself in the middle of the street. She immediately directed the girl onto her bus to keep her safe.

Alice N. Bravo, the director of the transit department said, “Marshall goes above and beyond her duties.” She added, “We are extremely proud and are grateful for her professionalism, heroism and her willingness to serve others even in challenging situations.” Earlier, Marshall used to be a certified nursing assistant. And now, as a bus driver, she’s glad to use her medical skills to rescue people. “I really feel everybody should learn CPR because it could save a life,” she said.