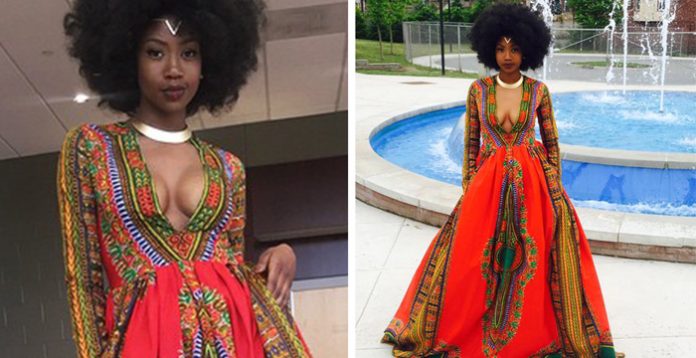 Kyemah Mc Entyre, an 18-year-old from New Jersey, has been going viral for her African-themed prom dress. She posted a picture of herself with a beautiful floor-length gown that took the internet by storm.

She then went on to caption the post by introducing herself and then spoke about how she was made fun of by her classmates for her ethnicity.

She went on to say that there are people who don’t understand your essence but you shouldn’t let that get to you. You need to celebrate your individuality and not let someone else define who you are.

Kyemah also went on to win the title of ‘Prom Queen.’ she even shared pictures of her proudly flexing the ‘Prom Queen’ sash.

Ever since she posted the picture, it has been going viral, and the post garnered thousands of likes and many comments appreciating her bold act and creativity.

She said that she had planned this outfit for months, and finally once she came up with a design, she showed the sketch to a local seamstress who stitched it for her.

The dress looked so majestic with its bright fabrics and a plunging neckline which made her look nothing less than a princess.

Kyemah now wants to pursue a career in design and is all set to move to New York and join the Parson’s School of Design. She also owns a store on Etsy called KyesMind, where she sells her artwork.