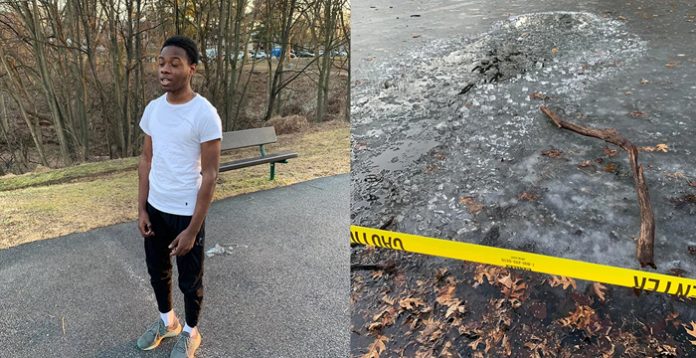 An unseasonably warm holiday transformed into an audacious ice rescue all of a sudden in Collingdale, Pennsylvania. This happened when a frozen pond pulled three children into the icy water. The incident occurred on Monday just before 3 p.m. when Anthony Alexander, a 16-year-old boy was hanging around in Collingdale Park with his friends, he heard the sc-ream of children, two girls, and a boy.

He said, “The kids really need help and I was not going to just sit there and let them drown.” At first, he tried to use a stick to rescue the children, and then he jumped in and pulled out one of the girls and the little boy.

“It was icy cold. I felt like I was sh-ocked, like my whole body went into sh-ock,” recalled Alexander. And thereafter a few moments, Collingdale Po-lice Sergeant Pat Kilroy arrived on the scene and jumped into the pond to save the remaining girl.

He said, “The pond was at least eight feet deep, the children were very s-cared and c-ried ‘help my sister’. At that moment, I just knew what had to be done.” A Sharon Hill officer and Yeadon officer were also on route to help but they had to be involved in a collision that occurred in Beachwood and Lincoln avenues. Where they faced non-life thr-eatening wounds.

The neighborhood parents said the pond need to be enclosed and fenced off. A Collingdale parent, Princess Rahman said, “On a fine day kids obviously wants to go outside, it was inevitable. There is nothing to hold them safe.” All the rescued kids were immediately taken to the hospital for evaluations and the kids were expected to be fine.