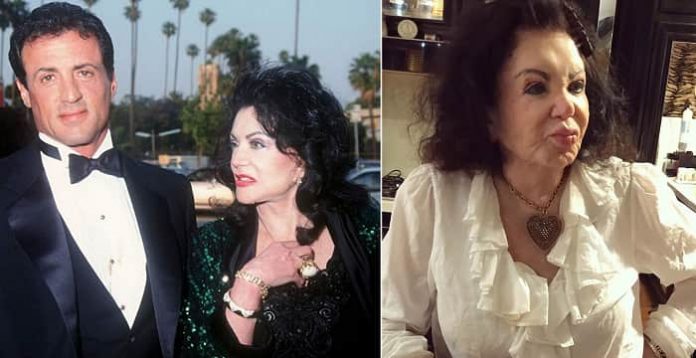 Sylvester Stallone is among the most well-known actors of all time, with a long and illustrious career in highly renowned films and universal love. Have you heard of his mom, on the other hand? What do you think of Jackie Stallone? She is not only Sylvester Stallone’s mother, but she is also a fascinating woman.

Jackie Stallone was a fascinating woman who enjoyed plastic procedures, which she did not hide and discussed publicly. She was born in Washington, D.C., in 1921. Her father, John, was a prominent lawyer in the city, and her mother, a Parisian socialite from Brittany, was of French origin.

Jackie was a very active young lady who enjoyed athletics in her leisure time, which is why, at the age of 15, she left her family to join the Ringling Bros. and Barnum & Bailly Circus’s Flying Wallendas show. Her father was not impressed with her aspiration to become a gymnast because he was a distinguished lawyer and wanted his girl to follow in his footsteps. Luckily, Jackie was able to realize her passion for performing live and worked as a trapeze performer before moving on to Broadway.

She eventually returned to her hometown and established a television exercise programme.

All of this may seem insignificant now, but Jackie was able to overcome certain conventional thoughts and ideals at the time and forge her own path. Jackie was the first woman in Washington, D.C., to have her own exercise TV show in the 1950s. Jackie chose to create her own gymnasium for women only because many things were tough for women at the time, including attending the gym. She claimed that the government attempted for a long time to shut down her business because she had a sculpture of a woman lifting weights, which was unpopular at the time.

Jackie met Frank Stallone Sr., a hairstylist and part-time actor, in 1945, and Sylvester Stallone was born a year later. Jackie stated that the pregnancy was tough and that the doctors did not act appropriately, causing the baby’s body to be malformed. Sylvester’s face was largely disable, and his tongue, lips, and chin were all impacted, but Jackie was determined to keep going so that her baby could communicate. Jackie and Frank had a second son after their separation, and she was left to take care of the kids. Jackie was featured on the GLOW: Gorgeous Ladies of Wrestling reality show. She then went on to work as an astrologer in the 1990s, becoming a cultural icon in the entertainment business.

Then she wrote Star Power: An Astrological Guide to Supersuccess, an astrology book that became a bestseller. Jackie was on TV a lot in the years after that, and she even made cosmetic products including face masks. However, she gained notoriety mostly as a result of plastic sur gery, as her face was drastically altered.

Although it is unknown how many cosmetic surge-ries she had, Jackie stated in a 2013 interview that she had over 50 injections and three chemical peels and kept going to have these practices even after the age of 91, but she later stated that she regretted having such a large number of plastic resection.

Jackie admitted that she exaggerated the amount of padding, and the publications lambasted her for her looks. She was, nevertheless, one of the few persons who confessed to all of her procedures and also acknowledged that she had to quit at some time. Despite the fact that she had to have numerous procedures, Jackie always took good care of her so that she could lead a healthy life and participate in sports. Jackie depart in September 2020, at the age of approximately 100, according to her son Frank. Many others then commented on Jackie, expressing their admiration for her. Jackie gone peacefully in her sleep in her Los Angeles home.