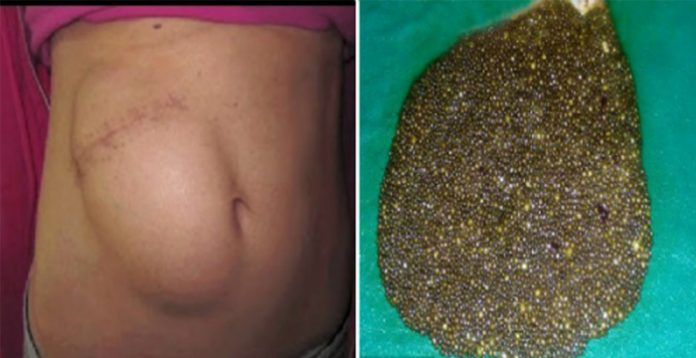 Removing gallstones from a patient’s stomach seems as simple as that. But, removing 11,950 gallstones is a tough job and at the same time, it could be a record because the numbers involved are too many. An Indian doctor was at the height of his career when he removed this many staggering gallstones. A woman approached the hospital after she couldn’t bear the pain in her stomach.

The doctors examined her thoroughly and were shocked to know the reason for her severe stomach pain. The patient’s name was Minati Mondal, she is a 51-year-old woman who had been suffering from chronic stomach pain for nearly two months.

When she arrived at the hospital the doctors found out she was suffering from a severe case of gallstones. Her surgery had to be done by a gastrointestinal endo surgeon, Dr. Makhan Lala Saha. He had to remove the stones from Mondal’s gall bladder in a milestone operation. Dr. Saha performed the resection and said he was stunned to see a large number of stones. Before the sur-gery, he knew the number of stones would be more but he didn’t expect the number would exceed 5,000.

The resection took an hour and the nurses spend nearly 4 hours counting the stones that were removed from Mondal’s stomach, the size of the stones varies from 2mm to 5mm. The number of stones removed was too many that it could be a new world record. After doing some research the doctors found out that, in 1983about 3,110 stones were removed from a German patient’s gall bladder and it was the highest till date. As the doctor has exceeded this number he believes this resection could be a new record in the medical industry.

Mondal was discharged shortly and now she is recovering slowly in her home. Gallstones are stones that are formed in the gallbladder. They are small in size and are usually formed by cholesterol. These are common in patients and nearly one in ten patients are affected by it. However, in most cases, they don’t require treatments and show no symptoms.