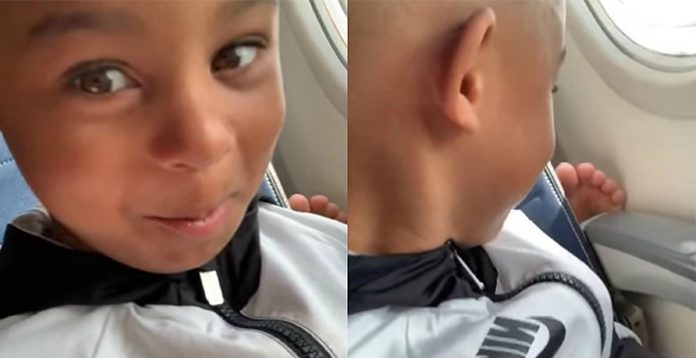 You must have noticed someone in a public place propping their feet where they didn’t actually belong. Well, they better not do it in front of little Rodney Small or they will get a reprimand.

According to The Miami Herald, Rodney’s father recorded his son while he was on a precious harangue while they were flying to Houston from Disney World. This 4-year-old boy was resting with his father when he saw a pair of feet resting on his armrest.

Rodney immediately said, “there are stinky feet behind me.” And turned to see who’s feet it was, “It’s a lady!” he called out and his father chuckled laughing. “Why do you have your feet behind me?” The small clip went viral and has been shared more than 36,000 times.

Later, Darryl explained that the lady moved her feet and apologized when he stopped recording. “We weren’t offended or anything, it was just his reaction,” he explained. Rodney’s trickery keeps Darryl from recording his son’s lively personality.

Darryl said, “Knowing his instinctive behavior, there’s no telling what we’re going to get from him so for me, like Snapchat and everything, I always have the camera rolling.” Later, after his video went viral, an Instagram page was created by Darryl to post Rodney’s adventures.