‘This Is Everything!!!’: Pennsylvania Dad Goes Viral After Gifting His Daughter a Vending Machine – Video 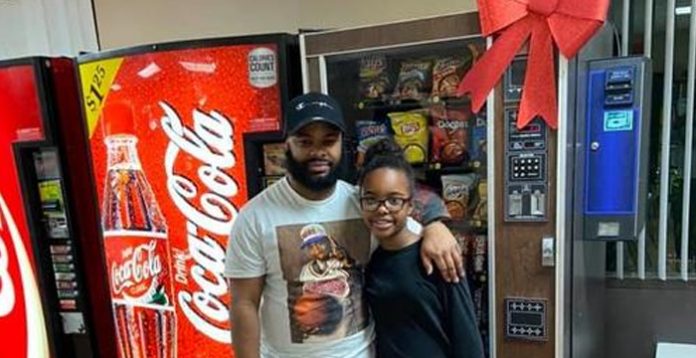 Toys will undoubtedly be at the top of any child’s Christmas wish list. A Pennsylvania father, on the other hand, opted to give his daughter the gift that keeps on giving: generational riches. Upon hearing that Reco Oxendine’s daughter would soon be the proud owner of her very own vending machine, she was “overjoyed.” News of Oxendine’s business move went viral on Facebook; his daughter wasn’t the only one excited.

More than 18,000 people shared the young entrepreneur’s article, and over 2,000 people left messages asking how they might start their own vending company. Others praised Oxendine for giving his daughter a head start on the road to financial autonomy.

“From day one, she was initiating executive decisions, claiming she could run it better than me,” Oxendine, 28, told Atlanta B*ack Star, laughing. “It basically placed her in a business mindset,” says the author. The devoted father is on a mission to teach his 10-year-old daughter and others her age the value of investing and accumulating money. That’s the goal of his new company, Next Uplifted, which teaches kids money management via practical skills.

Oxendine, his daughter, and other children started selling sweets in their neighbourhood in 2016, and they haven’t looked back since. The appropriately named “Candy Lovers” group visited barbershops, hairdressers, and local athletic events, where they sold refreshments door to door. “I got a trolley from Walmart and some candy, and we simply began selling it,” he said, adding that “the neighbourhood absolutely accepted it, like they liked what we were doing.”

Their endeavors were a resounding success, and Oxendine utilised the proceeds to begin investing in vending machines, which he estimates to be around a dozen at this point. Oxendine is now handing on his fortune to his daughter. He stated, “I want her to be a boss.” “At such an early age, I want her to learn the significance of becoming a company owner.” So when she’s older and needs to make judgments about how to generate money, she understands that a job isn’t the only option.”

While the initial investment is modest, running a profitable vending machine business is no simple task. Vending machines may range in price from $1,500 to $3,000, according to DiscountVending.com, depending upon the nature of the machine and its amenities. A machine that offers chilled snacks and has a credit card reader, for example, is usually more expensive than one without all these facilities. The most effective devices may yield more than $100 each week, but selecting the right placement is crucial. For his daughter’s machine, Oxendine got a prime location in the foyer of an apartment complex.

The location of the machine, the items in the machine, and recurrent maintenance expenses, among other considerations, all have a role in deciding a vendor’s performance. While vending machines are an excellent method to create passive revenue, they, like any other company, take a lot of budget planning, according to the Houston Chronicle’s small business blog. Relationship building with his consumers was just as crucial to Oxendine as getting the business aspect correct. “I created confidence with the folks who worked there when we were selling candies in the area salons and barbershops,” he stated.

“So it was a simple dialogue when it came time to really sell them on our dispenser [proposal].” When asked how he and his daughter choose the best foods for their vending machine, the Coatesville, Pennsylvania homeowner stated they just asked customers what they liked and proceeded from there.

Oxendine intends to teach the next generation how to develop their own fortune through his Next Uplifted programme, especially while African-Americans continue to struggle monetarily in comparison to their white counterparts. According to 2017 research by the organisation Prosperity Now and the Institute for Policy Studies, if the wealth disparity continues to increase, African Americans’ median net worth will sink to zero by 2053. “I glanced around my neighbourhood and realized where we as B*ack people stand in terms of wealth,” Oxendine told ABC News. “I observed it and was trying to figure out how I could have a personal impact on my neighbourhood.” So I decided to teach money management to children, and I’ve been researching ways to build money. “To be honest,” he continued, laughing, “children are driven by money.” “We have to take advantage of that.” Oxendine said he’d want to have another vending machine for his daughter shortly, but he wants her to make the choice on her own.

“I want her to pursue that expansion concept.” “I’m not going to push anything on her,” he explained. “I’d like it to be natural.”