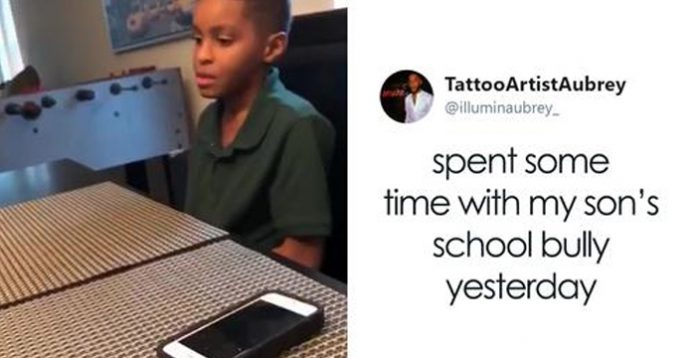 When Aubrey Fontenot’s son Jordan first told him about a boy who kept bo-thering him, like every concerned parent, he was determined to put an end to it. The Houston dad took the matter to school officials and informed them about the boy named, Tamarion, who was bo-thering his son.

However, another incident involving the same boy took place not long after, this time resulting in Jordan’s phone disappearing. Fontenot found himself in the school’s office again, speaking to the principal and a officer about the disappearance.

During the conversation, he found out that the boy, who was bo-thering his son was an 11-year-old boy who never liked his son because he never had what Jordan did.

In a conversation with Good Morning America, Fontenot said, “They told me he was homeless. I was like ‘oh okay I didn’t realize that, it makes a lot of sense.’”

Fontenot spoke with the boy’s mother, who told him that the family was going through hard times, and when he spoke to the boy, the youngster admitted that he was not happy that Jordan had clean clothes and he did not.

He also told him that other kids in the class used to make fun of him. The following week, he took Tamarion shopping to buy him some new clothes.

He also spoke to him about morals and principles and having self-respect.

Fontenot also set up a meeting between his son and the boy. He said, “From now on, you are brothers, and you protect each other.”

He also shared a part of his day out with the youngster in a video he posted on Twitter which featured him urging a shy and smiling Tamarion to sing.

Fontenot also set up a GoFundMe page to help Tamarion’s family, raising over $31,000 to get them back on their feet.