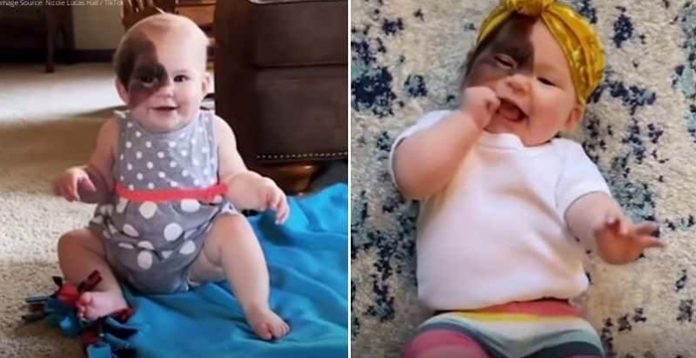 Winry Hall is a 13-month-old who was born with a rare condition called congenital melanocytic nevi. People born with this condition have an extremely big birthmark which is the result of an irregular development of pigment cells.

When Winry was first born her mom, Nicole Hall initially thought it was abr-ise on her daughter’s face.

Today Nicole is on a mission to make sure that her daughter knows how beautiful she is. She now spreads awareness about the condition.

According to a report given by the National Organization for Rare Dis-ases, CMN is a condition that can lead to light brown and black patches and it may also become very apparent by covering a large area in any part of the body.

Nicole uses her social media to connect with parents whose kids are also born with such conditions and encourages them to teach their children that being different is a good thing.

Nicole and Winry have met with many people from across the world who share the same issue as them but Nicole is also slightly wor-ied about Winry being bull-ed in school but is trying her best to make sure that her child is safe.

Nicole also said that Winry is the most energetic and happiest kid ever She talks a lot and radiates a lot of joy.