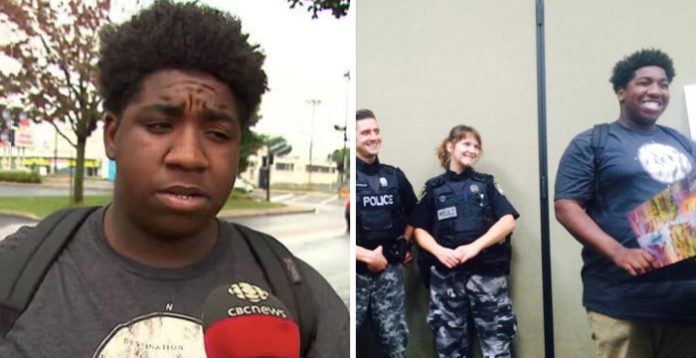 A cop in Canada has complimented a teen’s good decision-making in rescuing a lady from being kid-napped by befriending her kid-napper. Malyk Bonnet, a 17-year-old Montrealer, was dubbed a “hero” after noticing a man and a woman fi-ghting at a bus stop and sensing something was wrong. Before he could contact the officers, Bonnet caught the bus with the pair and even purchased them lunch.

The man, who officers characterized as “extremely th-reatening,” was sought for kid-napping his ex-girlfriend just hours before.

Bonnet told CBC News what first drew his notice to the couple: “The guy was yelling at her, the female.” He wasn’t very nice with her, and I decided to watch them because I was afraid he’d beat her, so I moved closer to them.” He claimed to be going the very same route as the man when he was requested for a fare to a neighboring town, and when they arrived, he offered to buy them lunch in a cafeteria.

Bonnet explained, “My aim was to put them in a crowded location where he wouldn’t injure her.” “I made the decision to be polite with the man and make him believe I was one of his friends. He seemed to trust me once I played my game.”

Bonnet called a c-op in the town, which is just outside of Montreal, and said he thought he was with someone who was being kid-napped. They were already on the lookout for a 29-year-old lady who fit the bill. The man was previously sentenced for ab-using and mailing th-reats to his ex-girlfriend. Since the age of 16, half of the Canadian women have experienced at least one incidence of physical or s-xual vi-olence according to the Canadian Women’s Foundation.

Before the officer came, Bonnet was unable to talk with the woman, but he could see she was comforted. “We made eye contact, and she was crying,” he told the CBC. “She was overjoyed.” The youth’s efforts, according to Vop lieutenant David Guerin may have rescued the woman’s life. “Bonnet now has 500 new pals in our division,” he said in an appearance with CBC News.