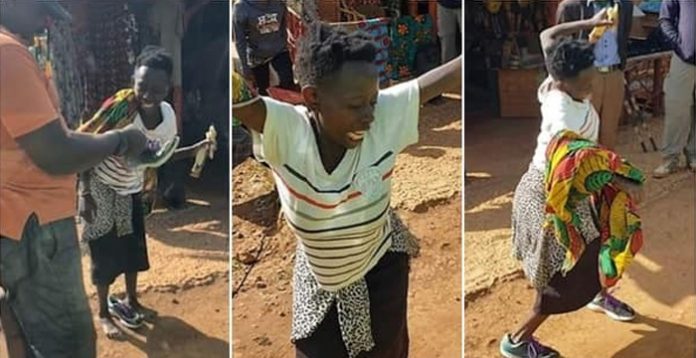 The Ugandan woman flare-up with happiness after Laura Grier, a passerby, dappled her shoeless and decided to help her. When Ms. Grier’s driver came out of the car and helped the woman to put the shoes on she excitedly began to celebrate the moment, while others applauded and cheered her.

The video was recorded at Bwindi National Park in Uganda. Ms. Grier said, “When I saw the woman on the side of the road barefoot I urged my driver to stop, the woman was barefoot and had never owned shoes before.”

She added, “We stopped the car to pull over and give them to her her reaction to wearing the shoes was priceless!” She further explained that she had brought the old tennis shoes with her so that she can give them to someone in need.

When the Ugandan woman put the shoes on she began dancing with joy. She carefully put her foot inside the shoe and showed thumbs up to people watching. Then she looked towards the helpful man who tied her shoelace.

She was dancing by tapping her new shoes on the ground by waving her arms, people around her were cheering her including Ms. Grier who was present inside the car.