Truck Driver D-ies After Helping Children Get Out of School Bus C-rash: ‘He Was Pretty Much Done’ – Video 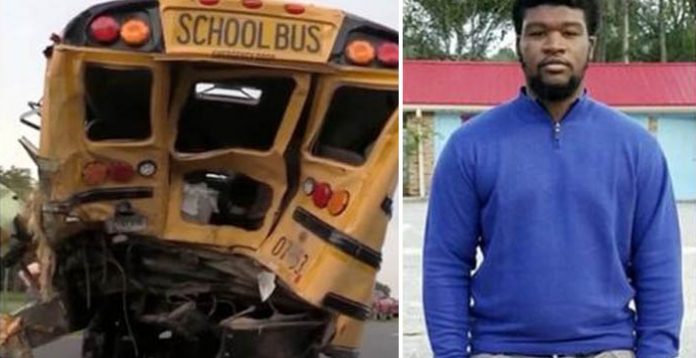 Johnathon Grayer, 25, c-rashed his truck into a school bus in an mishap when the students were getting out of the bus. Johnathon had got hurt and needed medical attention. Without bothering about his own wounds he got into the school bus to help and save the kids. In the surveillance camera footage of the bus, Grayer is seen helping out the children who were trapped under the seats.

He was lifting the seats, so that kids can come out. There were about ten students in the bus when Johnathon went to rescue them. Georgia State Trooper Shane Copeland told WSAV TV that Grayer used up all his strength to save the kids. Later when Grayer was taken to hospital for treatment he lost his life as he was badly hurt. Veronica and Isaiah, Johnathon’s parents say that their son had a golden heart and he is someone who “had this laugh about himself.”

Veronica said “They said that for some reason or another, he just ripped the whole seat out the bus with the child, and I was, like, ‘Wow’.” Veronica said that while taking the kids down from the bus he was trying to calm the kids also and telling them that things will fine. Veronica told to News4jax.com “He told a little child that they were going to get ice cream. And the parents said the little kid asked, ‘Where is the man that took me off the bus? Because we were supposed to get ice cream.’”

Johnathon’s father, Isaiah said after saving the kids, his son collapsed. It was almost like God saying “You did what I wanted you to do.” The kids who were in the bus were fine and were given treatment for minor cuts and br-oken bones. The driver of the bus who was also rescuing the kids is fine and safe. Grayer lost his life and till his moments he did his best to ensure that the kids were safe. For his parents, Johnathon’s brave act will always keep them going.

Cheryl – When his mama thanked the person who sat with her son until help came I couldn’t hold back my tears any longer! Her son was a true hero!

Annette – So sorry to hear this…Prayers for this family and speedy recovery for the kids….He sure had a kind heart to help the children….

Jonathan Morris – This young man gave his life to save children , He is truly a hero , My thoughts and prayers are with the family

Cynthia – I feel for every mother & father that loses their child. I’m so sorry…. I have no words. May his soul be in paradise with our great Lord.

Evan – This guy was a walking ANGEL from god. I’ve never heard of such doing in my life. He’s going to be in all those kids head for life for saving them. Rest with the lord now brother. You have changed me brother.

Sharon – Oh my God he’s gorgeous .I hope you find peace,your son is with the Angels now.