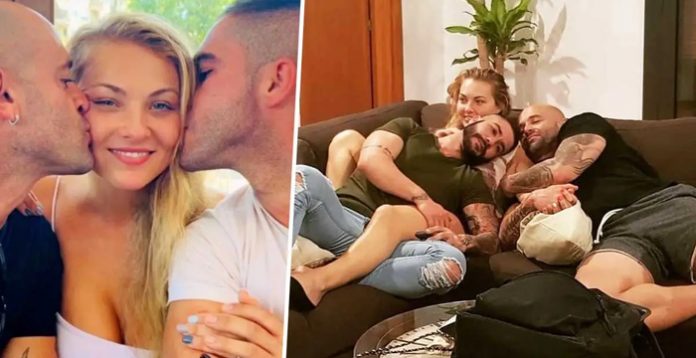 After both of them ‘fell in love’ with her at the same time, two best friends claim they have established a thr-ouple with a woman they met on vacation. On August 19, Dino De Souza, 40, and Saulo Gomes, 30, both from Brazil, met Olga, 27, from Belarus, in a local bar while on vacation in Barcelona. Olga, who was hanging out with a group of pals at the venue, fascinated the friends, and they both wanted to ask her out.

Both men approached Olga, unsure how to deal with the situation without jeopardizing their friendship, and say they finally began going to parties together as a trio.They have not stated how their private life functions or whether they all share a bed, but it is thought that the guys are only in a physical relationship with Olga and not with each other. They are now rumored to be living as a ‘thr-ouple’ in France.

Dino and Saulo claim they had no intention of becoming a thr-ouple and that they simply fell in love with Olga and that it was a natural progression in their relationship. ‘When Saulo and I arrived in Barcelona, we promptly went to a bar to watch the Champions League game that night,’ Dino recalls.

We walked into the pub and found Olga with a bunch of friends. ‘We greeted her and encouraged her to join us for a drink, and that’s how our lovely story began.’ ‘It’s not about being in a relationship with three people for us.’ ‘It’s a matter of chemistry; we just happened to be in the same place at the same time.’ We were so enthralled by the chemistry that we wanted to know what the other was feeling or experiencing.

‘I’d like to be able to express how we feel, but we don’t have any words in which to do so.’ Dino, Saulo, and Olga have been dating for about a year and a half and travel, eat at restaurants, and go on dates exactly like any other couple, but as a trio. Friends and relatives were initially taken aback by the unusual relationship, which their nearest and dearest failed to grasp.

Despite the negative reaction at first, the trio did everything in their power to explain their predicament calmly, and their relatives and friends are now on their side. They do, however, receive confusing looks and nasty remarks from others in public, which they chose to ignore in favor of focusing on their love. ‘At first, we received a lot of disturbing texts from friends and relatives trying to figure out what was going on,’ Dino recalled.

‘We’ve been polite, conveying to them how we feel about Olga and how we have evolved as people as a result of our relationship.’ ‘We don’t receive many remarks, but we do get a lot of strange looks.’ ‘When people have the chance to get to know us and chat with us, they entirely change their minds about our connection.’ ‘They are taken aback and change their previously held negative beliefs.

‘We are grown and thoughtful in our outlook on life. We aim to stay happy all the time and avoid wasting our energy on bad things. ‘We also don’t care what other people think of us!’ Every relationship has its highs and lows, and a thr-ouple is no exception. Dino, Olga, and Saulo regularly vote to settle on any big choices when they need to reach an agreement. When the thr-ouple disagrees, they seek solutions and take the moral high ground rather than fi-hting.

‘When it’s time to make a decision, we vote, and the vote with the most votes wins,’ Dino explained.

‘We don’t have any downsides.’ I won’t say it will always be this way, but for the time being, we aren’t allowing pessimism into our relationship. ‘We always talk about it and try to come up with alternatives to avoid unfavorable situations.’

‘When one of us has a difficulty, it becomes an issue for the three of us.’ ‘We put everything on hold and attempt to settle it as rapidly as feasible to keep our relationship peaceful and avoid additional stress.’ ‘I’m the child of the relationship, and I bring the happiness,’ Dino said of his role in the unique pairing.

‘Saulo is the responsible and disciplined one, whereas Olga is the chaotic and sidetracked one, but she adds genuine and pure affection to the relationship.’ The three, who are now based in Toulouse, France, intend to start a family together in the future.

‘We want Olga to have children from both me and Saulo,’ Dino continued. ‘While growing our organization, we intend to tour the globe and impart our perspective on our manner of living in the most simple way possible.’