Two Kids Use Bible To Silence Bu-lly; The Bu-lly’s Response Will Surprise You – Video 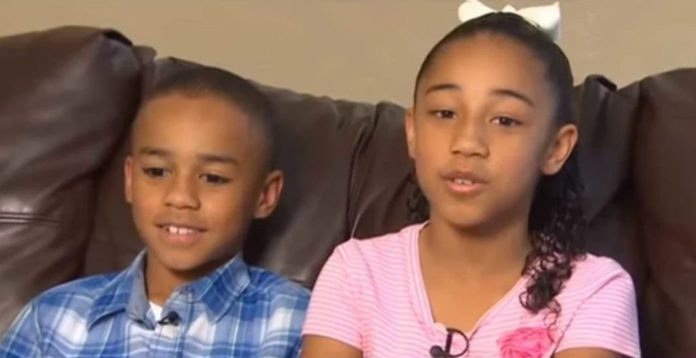 Phoenix, 8, and Kingston, 7, began riding the bus home from Turner Elementary School in Pasadena a few months ago. Nearly everyday, another child on the bus called them sl-rs. This kid hu-iliated them and made them want to fi-ght back, but they opted to do the right thing. These lovely children opted to be kind to those who had been c-ruel to them.

They clearly reacted in the most strong and effective way possible to silence a b-lly. The name of Jesus, as well as His word, has power.

This is an amazing display of how Christians and Christ followers should live: pray for those who despise you, embrace and pardon them. As He was being crucified, Jesus Christ set an example for us: “And Jesus said, ‘Father, forgive them, for they know not what they do.'” And they divided His clothing by lot.” (Luke 23:34) We don’t know why the they chose them as his target. Some believe he simply wants to be accepted, while others believe vi-lence was his method of expressing his despair and rage.

Bu-lying persisted until God, via their pastor, told them to love the child and give him a Bible. They invited him to church after that. Watch the kid’s reaction when he receives the Bible! It’s a heartwarming reaction. You’ve done a fantastic job, kids! God bless this lovely family for allowing the World’s Light to shine through them! What a wonderful method to demonstrate God’s love.

“For the word of God is quick, powerful, and sharper than any two-edged sword, penetrating even to the dividing asunder of soul and spirit, joints and marrow, and a discerner of the thoughts and intentions of the heart,” says the Bible. (Hebrews 4:12)