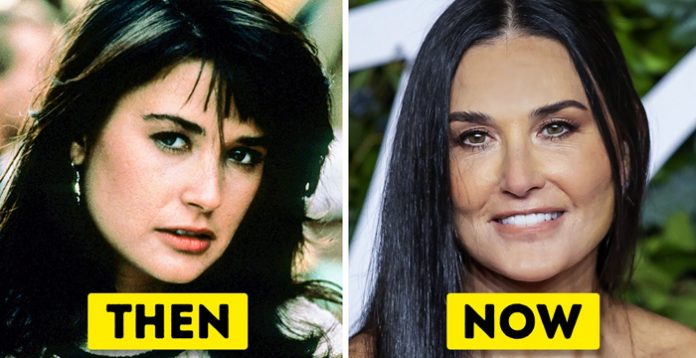 The term ‘It girl’ is used to denote high popular and attractive women in society. The label first appeared in the 20th century in London but it become established in the 80s and 90s when the ‘it girls’ began to receive massive celebrity status after modern TVs started appearing in every house. Everyone admires them and wanted to be like them, some men even dream to have a date with these beauties.

Those were olden days, now let’s go back in time and see how the 80s and 90s beauties look today and what they are up to.

Liv Tyler is the daughter of the popular rock star Steven Tyler. She began her modeling career at the age of 14 and in 1993 she starred alongside Alicia Silverstone in Aerosmith’s crazy video and become famous. Then she made her film debut in the year 1994 in Silent fall. She is best known for her role as Arwen Undómiel in the Lord of the Rings film trilogy.

She is an actress, model, and businesswoman. At the age of 29, she was associated with the cosmetics company Estee Lauder and starred in the ads for the company products. She is best known for Vanessa Kensington in the hit spy comedy blockbuster, Austin Powers: International Man of Mystery in 1997. She still makes her presence on TV and social media.

Denise Richard is an actress and a former fashion model. She is notable for her roles in Starship Troopers (1997), Wild Things (1998), and as a Bond girl in 1999. Her blue eyes and blonde hair made everyone fall in love with her. From 2019-2020 she starred in the reality show The Real Housewives of Beverly Hills.

Michelle Pfeiffer is recognized as one of the most prolific actresses of the 80s and 90s. she became famous with her breakthrough role in Scarface in 1983 and later in 1992 her role as Catwoman in Batman Returns cemented her success. We will see her again in the upcoming TV series, The First Lady.

She is best known for her role as Amanda Woodward from Melrose Place. She received 4 consecutive Golden Globe nominations for best actress for that role. She was also included among the 50 most beautiful people in People’s Magazine twice. In 2016 she appeared on the TV series Too close to Home and in 2017 on Fresh off the Boat.

Christina Applegate received massive recognition as a child actress for starring Kelly Bundy in the sitcom, Married… with Children. Then she continued acting and established a successful film career, she won 7 nominations in Primetime Emmy Award and 4 nominations in Golden Globe. She now has the lead role in the Netflix series.

Brooke Shield was initially a child model and later in the year 1980 she become notable for her role in The Blue Lagoon. She recently made her appearance in the Mexican Movie,
My Boyfriend’s meds.

After a brief and successful career in modeling, Kim Basinger began her acting in the year 1976. She is best known for her role as a Blond girl in Never Say Never Again (1983) and Vicki Vale in Tim Burton’s Batman (1989). She made her latest appearance in the Fifty Shades trilogy that occurred in 2010.

Cindy Crawford was one of the very first supermodels of the 80s and 90s. Her mole become a trademark and she appeared in several music videos, magazine covers, and beauty campaigns. Despite quitting her full-time modeling in 2000, she is still spotted for a few brands.

Meg Ryan, the sweetheart of the Americans hit the box office with her role in the movie, Top Gn in the year the 1980s. She received widespread attention and a Golden Globe nomination for starring in the comedy, ‘When Harry Met Sally’. Currently, she is trying herself behind the screen as a director.

Alicia Silverstone gained the title of “teen idol” after she made her appearance in the music video, “Cryin” at the age of 16. Later in 1995, she become world-famous for starring in Clueless. Now, she is part of the Netflix series, The Baby-Sitters Club.

Molly Ringwald became everyone’s favorite in the 80s after she starred in 3 big movies: Sixteen Candles (1984), The Breakfast Club (1985), and Pretty in Pink (1986). Now, she has a recurring role on Riverdale, The CW television series.

She is best known as the blond bombshell model, she became famous after participating in the TV series, Baywatch, from 1992 to 1997. She made her latest appearance in 2018 as a contestant in the ninth season of ‘France’s Dancing with the Stars’ and was also spotted as a guest in the reality show, The Hills: New Beginnings.

She was the first female artist to give a debut album that achieved 4 top-5 hits on the Billboard Hot 100. In 1985 Cyndi Lauper received the Best New Artist award at the Grammy Awards. She still holds her pace with her rocking hairstyle and eccentric clothing, we could still see her in several TV shows now and then

Winona Ryder become popular through Tim Burton’s movie Beetlejuice in 1988. Noe, she stars in the Netflix series Stranger Things and the HBO limited series, The Plot Against America.

Demi Moore born in 1962, became world-famous after her role in Ghost, she also receives a Golden Globe nomination for the same. Recently we could see her in the TV series, Brave New World, and Dirty Diana.