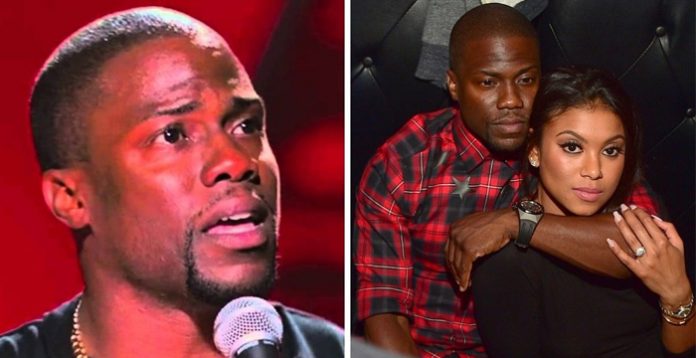 In 2016, Kevin married for the second time with an Instagram model Eniko Parrish after being together for several years. In the next year of their marriage, their son, Kenzo was born and the next month Hart publicly accepted that he deceived his wife when she was 8 months pregnant. How she dealt with such disloyalty also towards the end of pregnancy left the public to think about why she simply forgave him.

As he bamboozled his wife with model Montia Sabbag in 2017. Their physical meet was recorded and later released to extract millions of dollars from him. Montia claimed that it was not her who released the clip and later, she s-ed Hart for $60 million, claiming he with his friends’ plot to hide the camera. In Kevin Hart’s Netflix docuseries(2019), the couple openly shared about the double-crossing mess which tested their marriage.

The episode gets real as Parrish discloses how she came to know that her husband had disobeyed her. “I don’t know who it was. They sent me an edited video of Kevin and another woman…I was having breakfast and I opened my phone and immediately I just lost it. I called him, I’m crying, I’m p-issed” said Eniko Parrish.

At first, he defended himself, but a few months later, after a shakedown attempt by an unidentified party, he had to publicly apologize on Instagram. Kevin Hart’s post reads: “I made an awful mistake in judgment and put myself in an environment where only poor things can happen, and they did. It’s a moment when you know you’re wrong, and there are no excuses for your wrong behavior.” Along with the apology video, he wrote, “Sending so many apologies to my wife & kids. I gotta do better and I will. I’m not perfect and have never claimed to be …I love you all.”

Parrish said she is happy that it kind of happened, and thinking of this experience makes her sensitive. The pair have been open about the factors that kept their marriage intact after Kevin’s misdeeds. As Parrish was about to become a mother, she explained how she “kept thinking about the baby” and how she had to “maintain a level head.”

Giving a second chance to Hart, she said, “I think that’s the only thing that really got me through.

I wasn’t ready at the time to just give up on my family. I wanted Kenzo to be able to know his dad…It was a lot for me, but we’ve been through it, we’ve gone through it, we passed it and he’s a better man now because of it.” She further added, “I believe in second chances. I’m all about forgiveness, and you only get two times. Three strikes you’re out, you’re out of here. So, as long as he behaves, we’re good.”