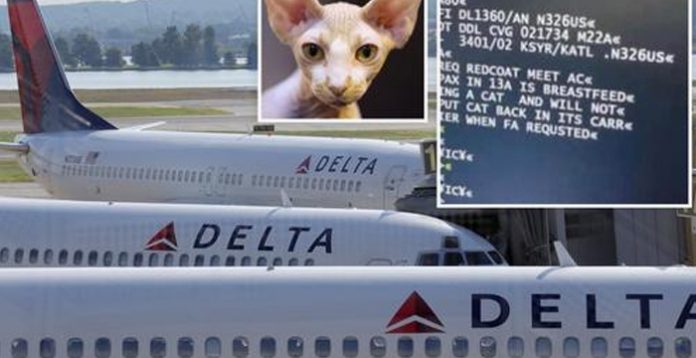 Recently a woman who took a delta flight started B-feeding her cat despite being stopped by the flight attendant. The identity of the woman is still unknown, she was flying to Atlanta, GA from Syracuse, NY. She was found nursing her hairless cat on the plane, the flight attendant repeatedly told her to stop feeding her feline and request her to put it back in the cage but the woman refused to listen her and continued what she was doing.

Hence the flight crew had to send a message to alert the Delta crew about the woman. The message was sent via the Aircraft Communication Addressing and Reporting System (ACARS). The message reads: A passenger in seat 13 A is nursing her cat and she refused to put it back in the carrier upon request. A picture of the message board was found on Reddit and it was posted on Twitter by Rick Wilson. Based on Newsweek report, On Nov 13, Ainsley Elizabeth the flight attendant who was on board when the incident occurred explained in detail about what actually happened in TikTok.

She said, “The woman had this hairless type cat wrapped in a blanket to make it look like a baby. Her shirt was up and she was trying to feed the cat by making it latch and she refused to put it back on its carrier. The hairless cat was yelling for its life.” Elizabeth further added that the security there got involved, however, she was unaware of what happened to the woman and the cat once the flight landed in Atlanta. The Delta Employee who has alerted the Delta crew through the ACARS message requested the Delta Red coat Team to catch the woman after they reach the ground.

According to Delta’s website, “red coats are airport customer service experts, who are specially trained officers to handle customer-related issues. They are known by their bright red colored coats,” The airlines’ website also describes the rules and policies on women nursing babies. The policy stated, “Delta airlines support women’s rights to nursing on Delta connection Delta facilities and on board Delta. If you want many airports also provide private lactation spaces and rooms.” Delta allows small pet animals like cats, dogs, and birds that fit in a small ventilated pet carrier to board domestic flights