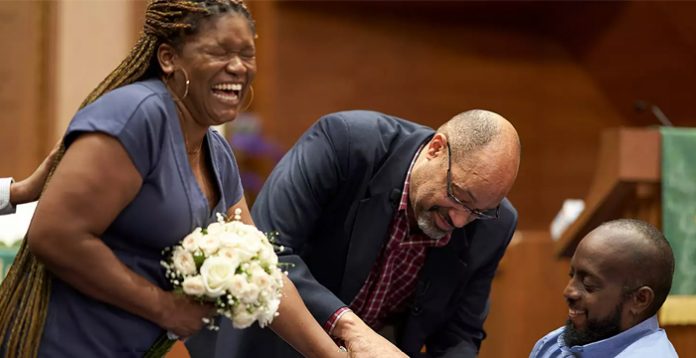 The bride says, “I cried before I even got in the door of the chapel.” Corey Cunningham was working in a refinery in St. Croix in the U.S. Virgin Islands when he had a convulsion. The 45-year-old hydro blaster for an oil and gas company was vacated to a hospital in Puerto Rico.

And a month later, when he was at home in Houston, he was diagnosed with brain ca-cer.

Unfortunately, doctors at Houston Methodist Hospital said, there is no cure for the stage 4 Glioblastoma, however, with treatment his life expectancy was about 15 months. His then-girlfriend, now wife, Tyyisha Evans said, “It was heartbr-eaking.” “We sobbed together. I said, ‘You have to suppress. I need you to suppress it.’ And he did.” Despite having medication, radiation, and chemotherapy, the treatment wasn’t working.

When a comforting care physician asked Cunningham who he wanted as his medical power of attorney. To which he said, he bought a diamond ring and he wanted to marry Evans. The doctor called Evans and raised the question. Evans was completely surprised, And shared, “I just didn’t expect him to have that on his mind. I thought this was going to be the last thing he would think about.”

She said yes. Actually, this was the fifth time Cunningham had asked Evans for marriage. The pair met on a dating website in 2013. “I fell in love with his strength,” says Evans. “He’s definitely a man’s man.” Evans loved his adventurous nature but some obstacles held the pair back from tying the knot.

Cunningham used to travel a lot for work and remain at a distance from his love for months. They lived together and whenever he would ask her for marriage under that circumstances, she says, she just wasn’t ready for it.

Another big obstacle that stopped their wedding was when Evans was diagnosed with br-east ca-cer. A year later she recovered and a month later, Cunningham was diagnosed with ca-cer. This time Evans accepted his proposal and nurses rounded up into wedding planners.

“It was like Make-a-Wish, only with a wedding,” says one of his nurses, Rita Lane. Cake, flowers, and the photographer were arranged by the staff.

They decorated the hospital cathedral and turned Cunningham’s wheelchair into a costume. Nurse manager, Eva Boone said, “It allowed us to express the love we have for Mr. Corey,” “He was a wonderful patient.” An hour before walking down the aisle, Evans came to know that Cunningham was ready for Hospice care.

Evans said, “It was overwhelming. Extremely overwhelming, I cried before I even got in the door of the chapel.” She cried when Boone handed her a bouquet of white roses. The wedding ceremony was also attended by three out of four of Evans’ children, her 4-year-old grandson to whom the couple was raising, and Cunningham’s 19-year-old daughter. Evans said, “It was much more than I expected,”

She added, “I couldn’t believe how many total strangers were in tears on our wedding day.” Nurse Laine shared, “The look on his face when he said ‘I do’ — it floored me.” “He started crying again. And then he said, ‘It’s about time.’ Then we were laughing and crying at the same time.” The pianist played the couple’s favorite song, “You and I,” by O’Bryan. Laine says, “It melded them as a family, “Whatever comes next, they’re always going to be a family.”

14 Photos That May Challenge Your Vision a Little Bit