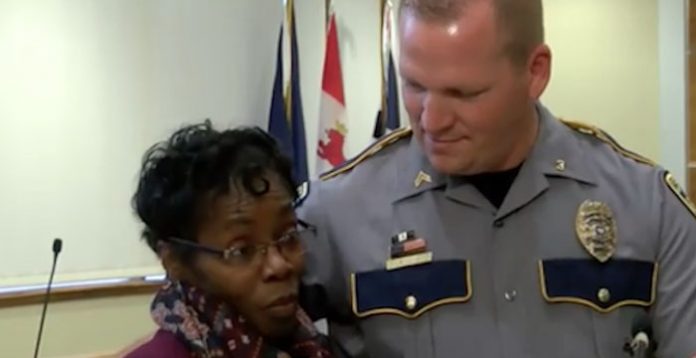 When a Baton Rouge officer was being ravished at a traffic stop, Vickie Williams-Tillman understood she just could not sit behind and stare. While Vickie was on her way to operate some chores when she reached a traffic stop and saw an officer on the side of the road engrossed in an agitated discussion with a man outside of his car.

As Officer Billy Amie was restraining the man in handcuffs, the driver became contentious towards him.

Vickie was witnessing this as she was all set to cross the road, and after she saw the man turning antagonistic, she started to brake and rolled down her window to check if the officer needed any kind of help. However, before the officer had a chance to respond, she saw the man leap forward towards the officer and started ba-ttering him. The man took the officer’s baton and sm-ashed it on his head.

Vickie declined to just watch this take place right in front of her. She immediately hopped out of her car and jumped onto the man’s back. The Baton Rouge Po-lice Department started: “Risking her safety she jumped out of her vehicle, and onto the back of the 28-year-old assailant. Ms.Williams-Tillman was able to help hold off the assailant until other officers arrived.” After that, the po-lice department has announced Williams-Tillman as a true hero. Vickie said, “I’m just so happy, lost for words. I’m just so glad of the turnout. I know God led me in that direction when I left my home.”

On that day officer, Amie was taken to the hospital where he was treated and then got discharged later in the day. The man was imp-risoned as the other officer arrived on the scene. He has been taken to Parish lock-up on several indictments, involving ownership of narcotic material.

The entire department was impressed with her efforts, and couldn’t believe that she was courageous enough to do what she did. “I can’t tell you…how much courage and how much bravery that took for you to get out of your car. We are grateful to you…And we’re going to see if we can recruit her,” said the po-lice department. We are so glad that everything turned out to be alright, and no one was severely wounded.